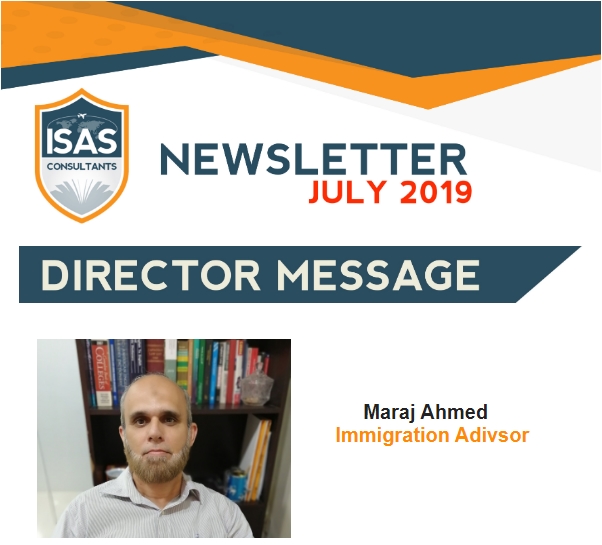 The month of June has again been very exciting in terms proposals and changes in the immigration policies of major migrating countries. Some of the highlights includes:

The Trump’s government has proposed US’ immigration policy’s shifting from family immigration and H-1B visas to a points based skilled migration plan like Canada and Australia. This gives an indication that the world’s talent hunting race between the major countries will become more competitive. The expected entry of USA into the points based skilled immigration might help to lower down the points selection criteria of Australia and Canada. On the other hand Australia, New-Zealand and Canada will continue to promote  regional sponsored pathway for migration instead of independent visa class. Furthermore, Australia’s skilled category quota for this financial year 2019/2020 has been lowered by 30000  whereas Canada’s hasincreased their quota of number of skilled migrant for the current financial year.

Overall it is expected that the residence policies of most countries will shift from offering direct permanent residency to a regional based sponsorship visas.
As getting closer to Brexit, UK’s new ‘start up’ and  “Innovator Visa” are slowly but gradually gaining popularity in the market. It is expected that the “Start Up Visa” in particular will be a very successful visa for young entrepreneurs.
Germany is beginning to gain ground to attract foreign talent by offering a similar point based immigration system as other countries to do. The skilled category is expected to be launched in early 2020.

Currently, Switzerland and Singapore have been rated as the largest skilled talent hunting countries of the world.
Saudi Arab has recently announced a premium residence program in which first time permanent residence stream has been made accessible to aspiring applicants.
UK and Canada are shaping up their student visa policies to become more attractive destinations in the coming years, while it appears that international student visapolicies of Australia, USA and New Zealand would not be as promising as before. Consequently, it is expected that new policies of the countries would not allow a permanent settlement options for international students after studies.

Former Minister says Immigration NZ should not assume all partnership visas are fake:

World's most powerful passports for 2019 revealed: