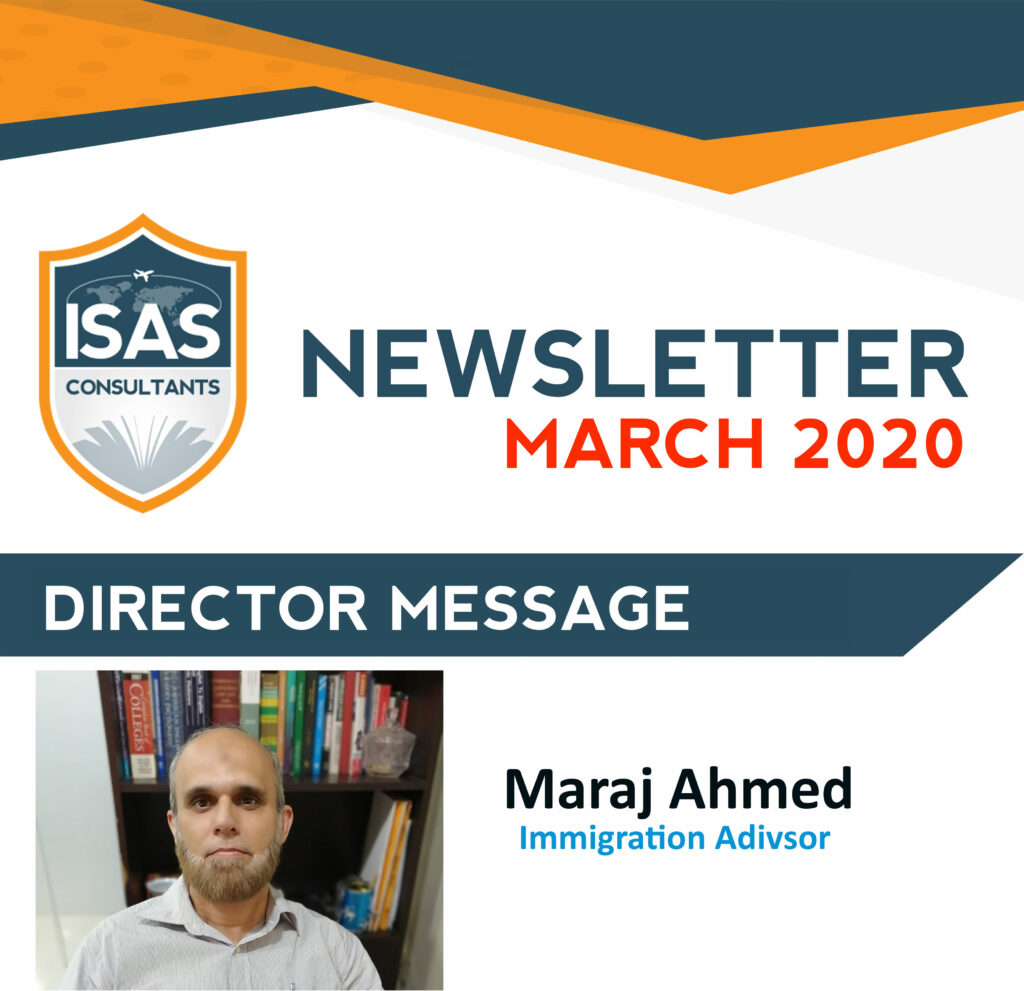 The first quarter of the year has been unprecedented as all businesses in the world have come across to entirely different challenges roused by the ongoing COVID-19 endemic. The lockdown of the countries has severely affected the travelling all over the world which has directly impacted the immigration policies and also on the people approach towards travelling and migration particularly in the short run.

Almost all major countries have stopped or slowed down their visa application processing and it is expected that the same trend would continue until July/August this year.

It is also foreseen that in the next quarter of the year the volume of visit, work or tourist visa applications would be quite low but on the other hand the student and skilled immigration applications will increase.

Due to the massive lockdown of the boarders and cities, the educational institutions are now offering their programs online, however the majority of international students are still inclined towards classroom education.

China which is a major source country for providing international students to various study destinations, but unlike previous years the enrollment of Chinese students, this year would not be as high as it was has been in earlier years. This would certainly increase the visa approval rate from the countries like Pakistan, India, Bangladesh and Nepal.

On the other hand, UK’s Global Talent Visa would also be a great attraction for PhDs from all over the world. PhDs from Pakistan and from other Asian countries would try to get benefit from this visa.

Australia and Canada have shown their objectives to promote their regional or provincial sponsorship programs and they are introducing policies that can encourage candidates to apply for their designated regions.  Australian 491 visa class and Canadian Provincial Nomination Program for Saskatchewan have been gaining popularity and massive enquiries and applications are being in processed for these programs.

UK has already announced their point based skilled immigration policy to be effective from January 2021 whereas Trump’s government in USA has also announced their plan to introduce point based skilled immigration policy as has been adopted by Australia and Canada. So we are expecting 2021 a year of high skilled talent to move from number of developing or under developed countries to developed countries.

Opening of long awaited New Zealand residence policy for parents in the last month was a good news for New Zealand’s migrated families, however the high income threshold to meet the sponsorship requirement has been considered a check to reduce the number of applications.

It is also expected that Middle East countries would experience a considerable need of skilled workforce from countries like Pakistan, India & Bangladesh when the industries resume their operations after the Coronavirus endemic ends.

At last, due to the impact of Coronavirus endemic, the travelling in the next few months would be on the lower ebb particularly on the visitor or tourist visa categories whereas the volume of residence and student applications would not be so affected. But in the last quarter of this year, the immigration activities are expected to become normal as these were before the Coronavirus outbreak.

Countries around the world have taken drastic measures, including border closures, in an attempt to curb COVID-19.

13 changes to the US immigration system during the pandemic:

The Trump administration has made sweeping changes to the country's immigration apparatus...

Who Needs a Coronavirus Quarantine When You Can Party in Thailand?

Australian universities are so dependent on money from Chinese students that they’re helping them circumvent travel bans and quarantine.

The situation is continuing to evolve.  Recently schools throughout the UK have closed.  This is yet to happen to Universities.

Caring for 300,000 temporary migrants in New Zealand is a crucial missing link:

More than one-in-16 people in New Zealand today – or more than 300,000 in total – is a migrant without residence status.

New instructions are available for citizenship, permanent residence, temporary residence applicants and their families as Canada works to stop the spread of COVID-19....